If you are hiking in the woods in the wintertime you are not going to find any fleshy, annual mushrooms, but if you are on the watch, you are likely to find tough perennial fungi on older or dead trees. In a previous Nature Note, The False Tinder Conk (Phellinus tremulae) found on aspen and balsam poplar was discussed.  This Nature Note is about the Red Belted Conk (Fomitopsis pinicola) which shows up on dead conifers, especially on stumps and fallen logs. 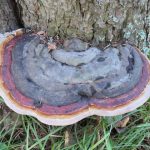 Photographed on September 16, 2017 in the J.J. Collett Natural Area

It is one of a number of wood-rotting fungi that occur on trees. Most have upper and lower sides with gills (lamellae) or pores on their undersides. Of the ones that have pores, many have flat “caps” while others are hoof-like and are called conks. Individuals of the present species have a hoof shape, are woody and perennial. The conks are 4-30 cm wide, 6-40 cm long and 3-22 cm thick. In the image above, one can see 5 dark, older growth rings, a red one from the previous year and a white one from the present year. The older rings often have a shiny or “varnished” appearance. The underside is whitish and bears 3-5 round  to angular pores per millimeter. Many basidiospores are produced in the pore linings. When they are mature, they fall and are dispersed by air currents.

As is the case with most wood-rotting fungi, infection occurs when spores land on damaged tissue, for example a scar where a branch has fallen, a fallen tree or a stump. Fungal hyphae then spread into the heart wood resulting in a brown rot. This degrades cellulose making the wood brittle and less valuable to the timber industry. Along with other wood-rotting fungi, the present species is part of nature’s clean-up crew that helps convert dead plants into soil.

This fungus show up in most areas where coniferous trees, especially spruce, are found. It has rarely been found on deciduous trees.

You can find more information about this interesting fungus on the internet  at https://en.wikipedia.org/wiki/Fomitopsis_pinicola , on pages 96 and 97 of Ginn’s (2017) “Polypores of British Columbia (Fungi: Basidiomycota)”, B.C. Tech Rep. 104; and in a variety of books dealing with fungi.

Keep your eyes open when out on a nature hike. If you look closely, you will often be amazed at what you can see.