I had a great hike this morning at the J.J. Collett Natural Area, NE of Lacombe. As usual, I carried my camera, a point and shoot Canon Power Shot SX240 HS, a well as my butterfly net in the hope of coming across an interesting insect or two. I am an Honorary member of the Board that looks after the area and I am interested in adding to lists of the various insects, especially butterflies and moths, of the area. These lists are maintained on the area website.  Eleven butterfly species were seen on the hike: Erynnis icelus, Erynnis persius, Carterocephalus mandan, Cupido amyntula, Papilio canadensis, Aglais milberti, Polygonia satyrus, Boloria bellona, Coenonympha inornata, Erebia epipsodea and Oeneis macounii.

I am also interested in dragonflies. Dragonflies are wary and seldom let one get close enough for a decent photograph. My technique with them is to catch them with my net, then hold them by their legs with my left hand and photograph them in macro mode with my camera held in my right hand. I take several shots in order to get dorsal, lateral and head on views. I then release the dragonfly. Catching them is easier said than done as they move very quickly and avoid a swinging net. I must have seen a hundred this morning and never caught one. I finally did catch two by flopping the net down on top of them as they were perched on vegetation. Both turned out to be the present species.

The four-spotted skimmer is characterized by having a medium size, broad abdomen, forewings that have small dark spots on the leading edge at the end and in the middle, and hind wings that have the same spots as well as a dark triangular spot at the base. Comparison with the descriptions and illustrations in the books listed below is recommended as some other species are rather similar.

According to Paulson, the present species ranges across Canada to Newfoundland and is also found in Eurasia and Japan.

Dragonflies are our friends as mosquitoes are one of their major food sources. This applies to both their aquatic immature stages which are carnivorous and feed on mosquito wrigglers as well as other prey and to the dragonflies that catch the adult mosquitoes on the wing. 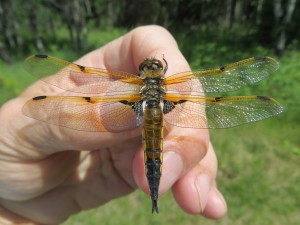 Three books that cover the dragonflies of Alberta and adjoining area are the following. All are good.

Hutchings, G. and D. Halstead.   2011.   Dragonflies and Damselflies in the hand.   Nature Saskatchewan.