On May 27, 2016, I was hiking through saskatoon/chokecherry/aspen woods on the Public Walking Trail in Rochon Sands Provincial Park when I spotted a mammal ahead of me. It was a Franklin’s Ground Squirrel or Bushy-tailed Ground Squirrel (Spermophilus flanklini). It was a little larger than a “gopher” (S. richardsonii), darker in color and had a more noticeable tail. 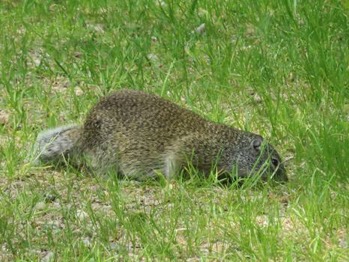 The Franklin’s Ground Squirrel is a bit longer (329-412 mm) than a “gopher” (264-337 mm) and has a longer tail (113-153 mm vs 55-82 mm). They also weigh a bit more. Both go into hibernation in underground chambers in late summer. The Franklin’s emerge in April when the grass is starting to turn green. Breeding occurs in the spring and the gestation period averages 28 days. One litter, usually of 7 to 9 pups are born in the burrow and the pups appear on the surface almost a month later. They feed primarily on green leafy vegetation but will occasionally eat insects, bird eggs or carion. Their call is a long, bubbling trill that is somewhat bird-like. Their enemies include the larger owls, hawks, coyotes and foxes. 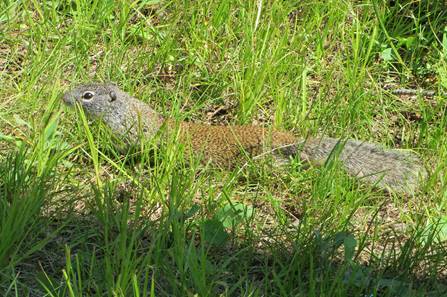 While the “gopher” is characteristic of open, prairie areas, the Frankin’s Ground Squirrel is typically found in aspen woods, especially in the Aspen Parkland of Alberta. It also occurs in southern Saskatchewan and Manitoba and then south to the north-central United States. Formerly common, its numbers have been markedly reduced because of the brushing of wooded areas to turn them into cropland. Now, they are restricted to Parks and natural areas where the forest vegetation has been conserved, such as Dry Island Buffalo Jump and Rochon Sands Provincial Parks. They are rather oddly absent in some apparently suitable areas such as The J.J. Collett Natural Area.

The genus name has changed over the years from Citellus, to either Poliocitellus or Spermophilus depending on the author.

You can read more about this interesting ground squirrel in the following sources.

Another of the fascinating species in our natural world. Get out and enjoy them.