On Saturday morning (October 29), I had a long hike in the J.J. Collett Natural Area (http://jjcollett.org/) SE of Morningside and NE of Lacombe. I was joined by another solitary hiker, Al Colquhoun, who lives on an acreage west of Ponoka. Trail #4 goes though a low-lying, heavily wooded area near the north end of the area. When we started on it, Al mentioned that he had seen moose up there before. It wasn’t long until we encountered a willow that had been rubbed and violently twisted, obviously by a bull moose, perhaps trying to rub the velvet off its antlers or showing a bit of hormonal aggression. The following image is of that willow.

A little farther along the trail, Al suddenly touched my arm and pointed at a yearling bull moose that was standing still and watching us. The following image is of that moose.

Moose are our largest big game animal, mature males being  over 1,000 lbs. (450 kg.) in weight. They also occur in Eurasia where they are called “elk”. They are secretive animals that tend to hang out in heavy bush, although in Alberta, small numbers even occur in the Prairies. They are browsers, rather than grazers, and consume young, tender twigs of willows and other shrubs. Their dark color, large ears and heavy snout make them easily recognized. They have long legs which enable them to get through thick cover and boggy terrain. Like our deer, wapiti (elk), prong-horned antelope, mountain goat, bison (buffalo) and caribou they have cloven hooves. Like our deer, wapiti (elk) and caribou, the males have antlers that are shed in late winter and thus are unlike prong-horned antelope and bison that have horns which are not shed. Adult male moose are called “bulls”, adult female moose are “cows” and moose less than a year old are called “calves”. Bulls can be aggressive when in rut, which generally is in late November. At that time the bulls give a “grunt” call and the females a “wail”. Cree and additional first nation folk, as well as others living in the wooded areas of northern Canada, hunted moose and often depended upon them as their prime source of meat. Hunting moose is allowed in Alberta on a draw basis with the season in most areas starting on November 1.

Two good books that deal with our mammals are J. Dewey Soper’s, 1964 “The Mammals of Alberta” and Victor H. Cahalane’s, 1947 “Mammals of North America”.

If you want to read more about moose, an excellent account can be found at http://en.wikipedia.org/wiki/Moose. 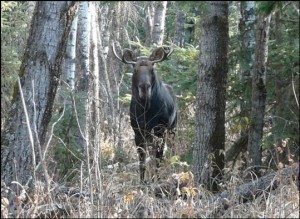