Much of my research time this past year has been devoted to documenting the fungi of a number of natural areas in south-central Alberta.  Many fungi have annual fruiting bodies and show up only in the warmer weather from late spring to fall. Now, with the advent of snow and the cold of winter, almost the only ones that we can find on a hike are the perennials that show up on the trunks of trees. This “nature note” is about one of these. 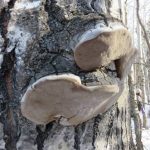 Here in south-central Alberta, many of us live in the Aspen Parkland, the blend zone between the Prairie and the Boreal Forest. Aspen is our commonest tree. Most older aspen are parasitized by this fungus. It gains access though airborne spores landing on a branch scar, then developing and moving into the heartwood where brown rot occurs. This fungus is, therefore, one of nature’s cleanup crew by helping to return older and dying trees to organic soil.

This conk or bracket fungus occurs on the sides of aspen trees, often around eye level. It is easily recognized by its hoof shape, the top of which is rusty brown then black and cracked while the lower side has a white rim and a grey lower side. On close examination, the lower side is covered with a multitude of tiny pores from which spores are produced and liberated to be dispersed by air currents. If one were to vertically section the conk, one would see a series of spore layers, each representing a year’s growth.

While many fleshy mushrooms are edible, this fungus is not. It’s common name comes from the fact that conks knocked off a tree can be used to help start a fire.

Phellinus tremulae was formerly included in P. igniarius. The latter is now understood to primarily be found on willows.

Many “mushroom” books leave out the perennial, non-fleshy species. If you want to learn more about this one look up the following – http://www.mushroomexpert.com/phellinus_tremulae.html. You can also find it in Yasu Hiratsuka’s “Forest Tree Diseases of the Prairie Provinces” and in Roger Phillips’ “Mushrooms and other Fungi of North America”.

Winter may be here, but there are still many things to see on a hike.