I was looking over some hilly, native short-grass, pasture land east of Arrowwood, Alberta on November 4 with my son Art when, much to my surprise, I realized that we were being watched by a gopher which was crouched at the entrance to its burrow. This was a very odd sighting as the individuals are rarely seen at this time of year as gophers normally go into hibernation in their burrows during the late summer or early fall. 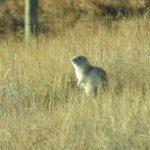 “Gophers” are rodents that are around 30 cm (12 in) long. Males are longer and heavier than females. They range in color from rusty to buffy brown. They generally occur in colonies in areas where the grasses are short. Their burrows usually have a rim of excavated dirt. When predators are sighted, they have a chirp for aerial danger or whistle-like call for a ground predator. They go into solitary hibernation in late summer and emerge, males first, when bare patches show up as the snow melts. Females emerge later, are bred soon after and after a gestation period of about 23 days, 6-8 pups are born.

During the spring and summer, gophers eat the leaves, flowers and seeds of various grasses and herbs. They later cache seeds for use when coming out of hibernation.

Many farmers with “gophers” in their fields or pastures, have an annual spring ritual of going “gopher shooting” or poisoning. Early poisons were dangerous as predators that consumed poisoned gophers could be killed. Less dangerous poisons are now being promoted.

Thirteen-lined Ground Squirrels are more slender, have 13 whitish stripes down their backs, occur in taller grass areas, are more solitary and have burrows without a noticeable rim of excavated dirt. Franklin’s Ground Squirrels are larger, darker, have bushier tails and occur in wooded areas. Prairie Dogs are larger, more colonial, have larger rims of dirt around their burrows and are found from extreme southern Saskatchewan south to Texas.

These ground squirrels are a major food source for Swainson and Red-tail Hawks, which are often called gopher hawks or Buteos, and also for Badgers and Coyotes.

As much of the prairies and Aspen Parkland have been cultivated, current cultivation methods with large machinery have tended to limit gopher colonies to fence lines. Coincidentally, that is where many badger holes are found.

“Gophers” are found only in North America, where they occur, primarily in prairie areas of the northern Great Plains, from Manitoba east to Manitoba and south to Montana and South Dakota.

You can learn more about these interesting mammals by going online and clicking on https://en.wikipedia.org/wiki/Richardson%27s_ground_squirrel.  You can also read the excellent accounts in Naughton’s, 2012 book “The Natural History of Canadian Mammals”, Pattie & Fisher’s, 1999 “Mammals of Alberta” or Dewey Soper’s, 1964 book, “The Mammals of Alberta”.

The sighting of a gopher at the side of a road is one of our first harbingers of spring.