Please find a pic of a fox I spotted at JJ.   The woodpecker photo is a still from a video I shot, and this bird is also known as the Arctic Three-Toed Woodpecker. As an added bonus, First croci of this spring, from April 24, on the morning they first appeared. The one crocus looks like Queen Elizabeth’s royal banner, it is so richly purple.

Thank you for all the work you and the other volunteers do for the Woods. I first started visiting about 30 years ago, and after moving to Morningside I have been walking there several times a week for 15 years. I have yet to grow tired or bored with JJ Collett, and am always contented and happy when I am there.
Ted Cameron 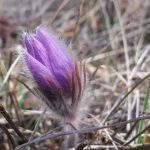 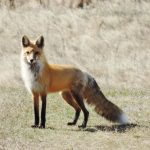 I chatted with Bruce & Gail at the Collett this morning. They mentioned spotting this cow and calf moose there last Sunday. Apparently there was another calf that was trying to reach these two but it couldn’t get through/over a barb wire fence.
Best wishes, Charley

On Saturday morning, I chatted with Jim Watson as he was starting to hike on Trail 1. He mentioned that on a hike on a day in March 2010 while he was on Trail 7, he saw a cougar at a deer kill.

I have have heard of no other sighting in the Collett. Single cougars tend to roam and they have been spotted all over the place. They are certainly not resident in the Collett. I was surprised to hear of this sighting. Cougars are very secretive and are seldom seen and they very rarely are aggressive towards humans. Information submitted by Charles D. Bird.

Yes it is a Plains Garter Snake, Thamnophis radix  .  I took this picture last September at main gate at JJ Collett, it was approximately 1metre long and 1.5 centimetres thick near the head.
It is regarded as nearly harmless and is non-venomous. The Plains Garter snake is native to the central USA but is found as far north as Canada and as far south as Texas. (Wikipedia).
There have ben several recent sitings of garter snakes at JJ Collett.  You must watch and listen carefully if you are going to see one.  Luck also helps. 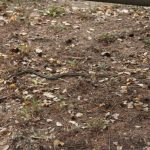 During our Fall Walk the longer hike spotted a cow moose and her twin calfs on trail 6 just past the gazebo.  It was quite a thrill.

Caution was taken as she has been protective of her young.

Hi
I came across a beautiful moose this morning April 20 on my walk, at coordinate H14 on the grid, in the clearing upwards the small pond.

Today my friend Laurie and I went for a walk at J.J. and we were so delighted and excited to see 2 crocuses emerging from Mother Earth (despite the snow overnight).  We were on the ridge of #5 between 3 and 4.  Then, as we approached #4, we saw a heron fly out of the marshy area!
I drive my school bus past here every day and have come to appreciate the changing of the seasons in the area.
Thank you to everyone who devotes your energies in keeping this area open for us all to enjoy and appreciate!

Almost the right size to role over the dam.

Yesterday, Oct 19th, I went for a hike on the trails and came upon a mom and baby moose grazing in a swampy area along path 4. I kept my distance but still enjoyed the feeling of awe seeing them so content in their habitat!

A huge thank you goes to "Ember Resources" for sponsoring our Education Program for 2018. The program would not be possible without the support of the community.

ONGOING NOTICES
A friendly reminder to keep dogs on leashes so they don't surprise other canines, people or resident wildlife. Your continued respect for others is appreciated ensuring safety for all.

We have had a reported encounter with a cow moose.
She is very protective of her twin calves.
As a result we suggest that if you see her and/or her calves you should not approach, instead change your course.

WARNING!!
Please be aware that a porcupine has set up home base at the half way point on Trail #5. Dog walkers, please keep your dog on leash in order to avoid a bad confrontation. Remember, it's their home, not ours. Humans large and small, please be aware and cautious.

JJ Collett is not a dog park. Lacombe and Ponoka both have off leash dog parks. Blackfalds now has one and Red Deer hosts a couple. We encourage you to keep your dogs on leash while at JJ Collett. (Ongoing)

The Board of Directors for JJ Collett Natural Area would like to thank all the volunteers at JJ Collett. We would also like to thank Barb & Dale Olsen for volunteering their time with tree removal on the trails and looking after the washrooms. Thank you all so much.May 2019.

Thanks to the Spring Clean Up crew at JJ Collett. Ron, your countless hours of help is appreciated. Thank you for your time.

DONATIONS!!
Donations can now be made online. ATB Financial has teamed up with JJ Collett Natural Area and each dollar donated to this cause will be matched 15% by ATB Financial. Please find the link to donate in the "Links" section on the left hand side of the page. Thank you ATB.
May 6, 2019.

Mother nature is beautiful, yet unpredictable. For your safety, please do not walk the trails during high winds. Trees may fall and cause serious injury to yourself, canines and wildlife. In the event you do head out, be careful. May 06, 19.