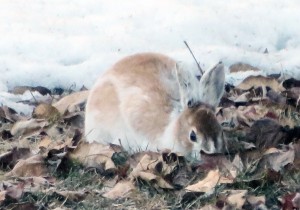 We have been experiencing a longer than normal winter. I am sure that you, like myself, have been anxiously awaiting the arrival of spring. The ice still hasn’t gone from Erskine Lake. Spring is arriving, however, as we can observe by a number of events in nature’s calendar. Here, in and around Erskine, Alberta, by now (April 7) we  have seen the return of Canada Geese, Starlings, Crows, the odd robin, and Ring-billed Gulls. Great-horned Owls have been observed nesting and coyotes are pairing up. This “nature note” is about another spring event, the shedding of their winter hair by Snowshoe Hares, often called “bush rabbits”, and its replacement by summer brown.

The above photograph was taken in early morning in our own backyard in Erskine two days ago. The hare was nibbling at green grass recently exposed as the snow melted.  It and another one, are mainly active during the night and are in, or near, trees and shrubbery on the north side of our house and in the neighbour’s yard.

In Alberta we have two true “hares”, the present one and the White-tailed Prairie Hare (Lepus townsendii); and one native rabbit, the Cottontail (Sylvilagus nuttallii). Hares have their coat change from white to brown on the arrival of spring, while true rabbits do not change their coat color. This change obviously provides camouflage protection from predators such as Great-horned Owls, coyotes and Lynx.

Hares and rabbits are Lagomorphs, not rodents, as they have four upper incisors, rather than two and because they rarely eat anything but vegetable matter. In the winter, Snowshoe Hares feed extensively on twigs and branches, when the snow goes they eat grass and many other kinds of plant material.

Snowshoe Hares are smaller, weigh a little less than half the weight of, and have shorter legs and ears than, Prairie Hares.

In Alberta, Snowshoe Hares are found in forested areas north of the Prairies, whereas White-tailed Prairie Hares are found in open areas, especially in the Prairies. As land in the Aspen Parkland was broken for grain crops and cleared for cattle grazing by settlers in the last 100 or so years, the habitat loss resulted in a reduction in numbers of Snowshoe Hares in that region. Cottontail Rabbits are found primarily in coulee areas in the southern part of the province.

Snowshoe Hare population numbers across northern North America fluctuate markedly roughly over an eight to eleven year cycle. The reasons for this are complex and still poorly known, due to factors such as predation, food availability, disease, and a build-up of parasites.

You can read more about this interesting animal online at http://en.wikipedia.org/wiki/Lepus_americanus.

Yet another member of our amazing natural world.