One of our most characteristic mammals of coniferous forests here in Alberta is the Red Squirrel. These active, inquisitive creatures are common in many areas. They often let one know that you have been seen by their chattery calls and they seem to delight in teasing dogs. They are 30-40 cm long, have rust red hair in the summer and gray brown hair in the winter, long “bushy” tails which are often curved upwards, and white underparts and eye rings. They are very active and sure-footed climbers. A single litter of 1-8 pups is produced each spring and they leave their mothers and nest when they are over 3 months old. They are territorial and defend their home ranges and middens. Their predators include owls, hawks, martens and a variety of other mammals that are lucky enough to catch them. They are found from Alaska and British Columbia in the west to the east coast of Canada and from the tundra south along the Rocky Mountains to Arizona, wherever coniferous forests are found. They are well-known to visit bird-feeders that are supplied with seeds. The European Red Squirrel, though similar, is a different species. Eastern Grey Squirrels look rather similar but are darker in color, occur only in some of the larger urban centers in Alberta, Saskatchewan and Manitoba, and are primarily species of the eastern United States. 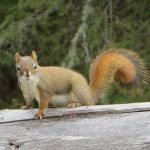 This squirrel is able to be active year-round, except for the coldest days, because its major food source in coniferous seeds. In the fall, as cones are maturing on spruce trees, individuals will climb up and bite them off, causing them to fall to the ground. After a while the squirrels will gather them up and store them in middens (see below). During the winter, they will visit the middens to retrieve the cones, remove the hard scaley bracts, and then eat the seeds. Red squirrels are also known to consume various above ground fungi of the families Boletaceae, Russulaceae and Cortinariaceae and even some underground fungi (see, for example, the paper by Currah et al, 2000, Fungi in the winter diets of northern flying squirrels and red squirrels in the boreal mixedwood forest of northeastern Alberta, Can. J. Bot. 78:1514-1520). If you are out hiking and find a mushroom up on a branch, it has probably been put there to dry by a squirrel and it will later be moved to a midden for winter food. 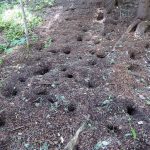 In my opinion, the best description of this squirrel and it’s life history is in Donna Naughton’s 2012 “The Natural History of Canadian Mammals”, Univ. Toronto Press. A good account can also be found at https://en.wikipedia.org/wiki/American_red_squirrel

This creature is another of nature’s gems, enjoy!